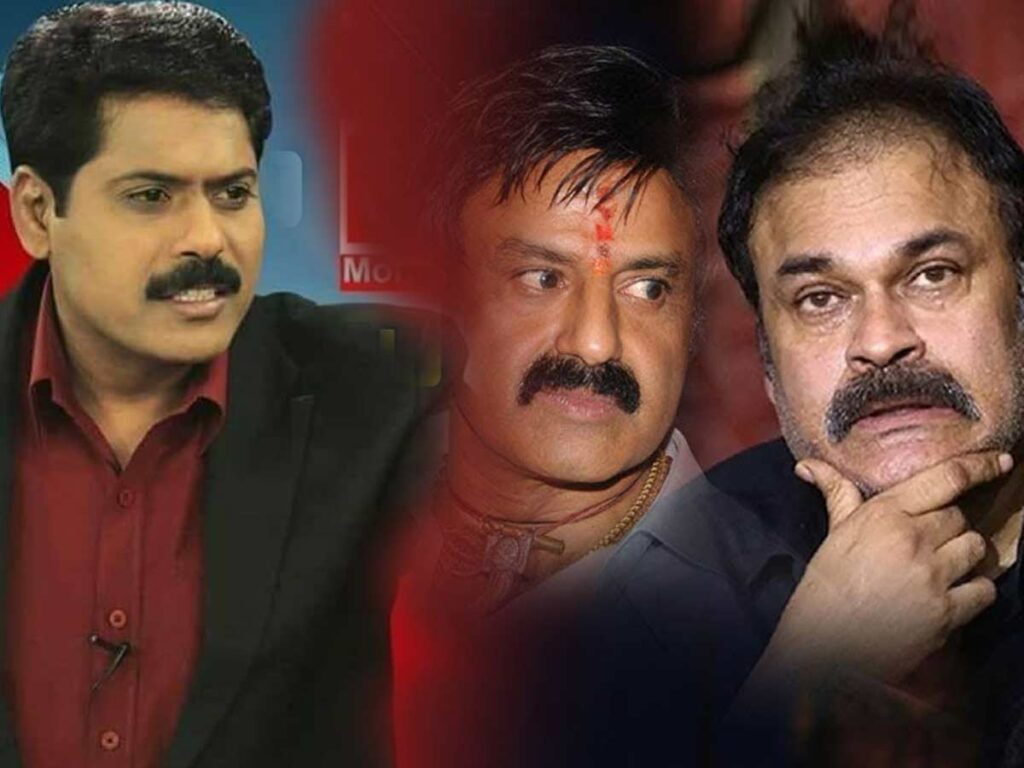 A very well known fact is that Chiranjeevi’s composure is one of his greatest assets and the lack of the same is the greatest liability of both his brothers. Pawan Kalyan’s emotional speeches and stands many a time lack logic and consistency with time. Now, Naga Babu’s recent reactions to controversies are making Pawan look better.

Naga Babu, the other day tweeted praises for Godse, only to attract huge criticism from all quarters, particularly from his very own Janasena folks. Before the Mega fans could forget the embarassment, the Mega brother got into a fresh one, yet again.

Nandamuri Balakrishna’s harsh comments for not being invited to meet KCR and Telangana to discuss the possibilities of reopening the film shootings, have triggered heat all over. Naga Babu took it over to next level by condemning Balayya’s comments, but his emotional reaction on behalf of film industry has not really gone well. The reason is subtly analysed by reporter Venkata Krishna on a live talk with Naga Babu.

Venkata Krishna effortlessly cornered Naga Babu, though not intentionally, made him run for words. Krishna started off with a basic question on why Naga Babu had to react on behalf of all film industry people, even when the biggies who were there at the meeting decided to leave it that way. Naga Babu once again said he did not like Balayya’s generalising statements about ‘land deals’, so he had to respond as one from the film industry.

Balayya met Telangana CM KCR months seeking help regarding Basavatarakam’s trust and it is needless to say how close were Balayya and Talasani, as the latter had a long political journey in TDP. The reporter asked Naga Babu on why get into it when they will be alright after all this. Naga Babu tried to bring out the TDP vs TRS rivalry to answer this but had to go, mum when Venkata Krishna’s spontaneity stressed that parties are different from persons.

Nagarjuna Was There, Why Not Balayya?

For a question on skipping an invite to a prominent actor from Nandamuri family, Naga Babu said he do not know who and why did it, but said Balayya’s loose words are not wanted in this. Venkata Krishna pointed it wrong on both sides as Naga Babu wants to blame Balayya for his words on behalf of the film industry by demanding apologies to Telugu Kalamathalli but do not want to take responsibility on snubbing the Nandamuri hero at the meeting. Naga Babu had to give up the discussion there, once again.

Naga Babu dragged it much saying that there is not just the Nandamuri family in the film industry, but many other big families and pillars like Akkineni and Ghattamaneni families also. Venkata Krishna was quick this time saying that is why Nagarjuna was there at the meeting from ANR family, but why not Balayya? Naga Babu lost it again.

Naga Babu jumped to the ‘land deals’ topic, saying it is not correct for Balayya to talk in such a way. Venkata Krishna countered that Naga Babu’s tongue slip on AP and capital lands is equally improper. Venkata Krishna found fault with Naga Babu’s ‘Rajadhani lands’ words as it turns the pointer towards Pawan Kalyan as well. Naga Babu tried to call them the words from emotion and asked how is it wrong.

In a final punch, Venkata Krishna asked Naga Babu if being a TDP leader, could be the reason for ignoring Balayya. Naga Babu tried to deny that but by saying how Chiranjeevi was invited being associated with Janasena. Venkata Krishna asks directly if Chiru belongs to Janasena and Naga Babu mumbled a second to say that he is the brother of Janasena chief. This is where Naga Babu’s word bank went nil when Venkata Krishna simply asked Balayya’s sister Purandareswari belongs to BJP.

They say that one should be thick-skinned to be in politics to take criticism and brickbats. It looks like emotion is dominating logic many a time with Naga Babu, leaving him to criticism, again which he is not willing to take?