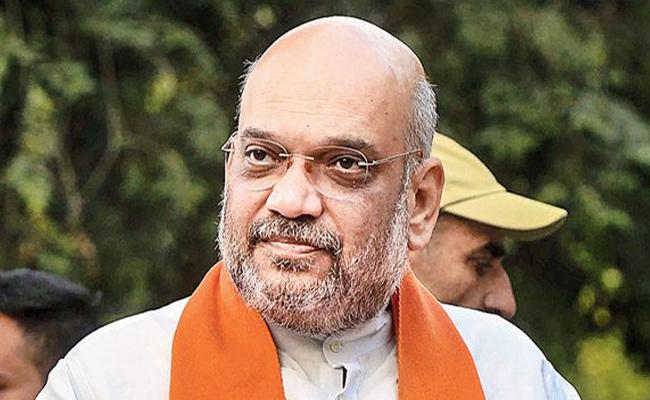 HYDERABAD: Administering a fresh dose of adrenalin to BJP workers, party leader and Union Home Minister Amit Shah on Saturday called upon them to be ready to throw out the TRS lock, stock and barrel in the next Assembly elections regardless of when they are held.

He warned Chief Minister K Chandrasekhar Rao that the bell was already tolling and he should realise for whom. “We are ready to face the elections any time. Announce polls tomorrow if you want,” he dared Rao. Shah asked the party cadre to remain battle-ready to inflict a crushing defeat on the TRS whenever the elections are held.

“KCR, who acts like a Nizam ruler, should go. The TRS government has become a byword for corruption and it should be decimated,” Shah said, addressing a huge public meeting organised at Tukkuguda here to mark the end of the second leg of the Praja Sangrama Yatra of BJP State president Bandi Sanjay Kumar.

The BJP leader tried to strike a chord with Hindus by calling Rao a leader who is akin to Nizam rulers. He also took a dig at the TRS’ policy of appeasement of Muslims. “The TRS government reminds one of Razakars. The TRS and AIMIM are like Siamese twins,” Shah said, adding that the steering of the car (TRS election symbol) is in the hands of the AIMIM.

The BJP leader was furious with the TRS for resorting to murder politics to strengthen its position in areas where it was losing ground. “This is a new and disturbing trend. In Khammam, the TRS workers drove our leader Sai Ganesh to end his life. How long will you escape? At some point of time you will have to face the verdict of the people,” he reminded.

Shah said he had not seen in his entire life a government as corrupt as the one headed by Rao. “How come KCR has not completed the Palamru Rangareddy Lift Irrigation Scheme? He completes only the projects from which he gets kickbacks. The State asks the Centre to allow it to raise debts. Why? For your son and the daughter (KT Rama Rao and Kavitha)? No matter how many scams you perpetrate, the money that comes out of them does not seem to be enough to fill your bellies,” he said.

Shah slammed the Chief Minister for his omissions and commissions with regard to the implementation of Central schemes. “KCR is not implementing PM Awaas Yojana and Ayushman Bharat. The CM’s tall talk of four new super-specialty hospitals is an attempt to pull wool over your eyes. How can you trust the CM when he cannot even improve facilities at Gandhi and Osmania Hospitals,” he asked.

Claiming that Rao was renaming Central schemes as though they took birth in his mind, he said, “For instance, Samagra Siksha Abhiyan which has turned into Mana Vooru Mana Badi.” The Union Minister sprang a surprise by saying that the Centre was ready to procure every grain of parboiled rice from Telangana.

This is a reversal of the Centre’s policy which was to procure only raw rice whether in Kharif or Rabi and not parboiled rice. “It is the responsibility of State governments to procure bajra, jowar, maize, and ragi, except wheat and rice. If you can’t procure parboiled rice, you can resign. We will procure every kg of parboiled rice and help the farmers of Telangana,” the Home Minister assured.