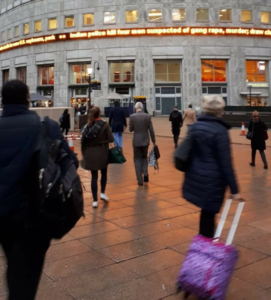 After Nirbhaya, lady doctor Disha’s rape and murder became internationally popular. On Friday the culprits of this crime were killed by the police in an alleged encounter. This was a national debate and many hailed even though its authenticity is yet to be verified.

The news of four accused getting killed once again spread internationally. On the busy streets of London, this encounter update got scrolled and it caught everyone’s attention. A picture of the encounter update scrolling on a screen is going viral in the social media.

Well, that’s the power of social media these days. Information can pass on from one place to another in just seconds.