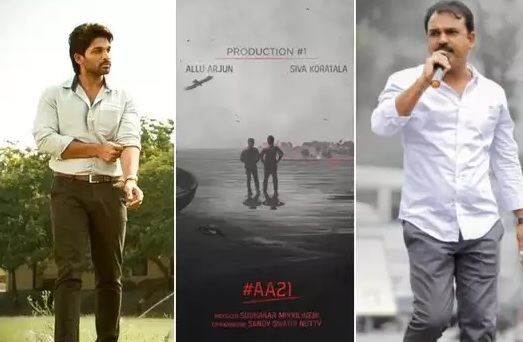 Allu Arjun scored a resounding hit with ‘Ala Vaikunthapurramuloo’. The film took his market and following to a whole new level. He wants to keep the success streak going and is also aiming a pan-India image.

Allu Arjun will next be seen in ‘Pushpa’ that is being directed by Sukumar. He is confident that the film will cater to pan-India audience and has lined up another highly exciting project. He will be joining hands with successful director Koratala Siva for AA21. The project was officially announced a few days ago.

Going into the story, Koratala Siva is obliged to work with Jr NTR and Prabhas. He had already signed agreements for these projects. However, Allu Arjun is reluctant to lose the opportunity to work with an in-form director like Siva now. So, he wanted to officially announce the project before Siva commits to work with other top stars.

Allu Arjun is perturbed that Koratala Siva might go ahead with other projects. Hence, the hurried announcement of AA21.

Meanwhile, few websites reported that Koratala Siva did not even narrate the story to Allu Arjun but the latter gave his nod to the project. However, sources close to the movie unit have rubbished these rumors.

Telegram
Allu Aravind, who is always in involved in Allu Arjun’s script selection process is very particular when it comes to conceptualization of projects. He gives the green signal only if the director comes up with a bound script. Same is the case with Koratala Siva as well. He completed the script work during the lockdown period and Allu Arjun is impressed with the same, say sources.

It appears to be that the rumors regarding the script of AA21 are completely baseless.