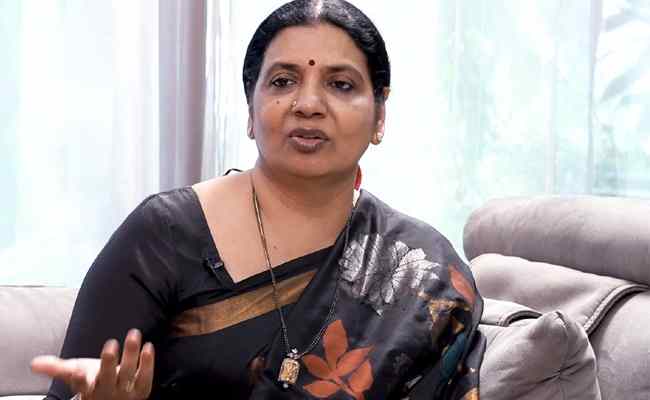 She also came up with different topics and concluded that the majority of the news about her family and herself are either cooked up or imagined by the media but not true.

Sharing about the political connections of her family, she said- “Rajasekhar garu never joined any political party. I joined the BJP. But since there is no possibility to work for the party in full swing, I just kept quiet. We worked for Congress with a lot of respect and admiration for YS Rajasekhara Reddy. But when Chiranjeevi merged his party into Congress, we felt not comfortable to continue. We didn’t feel comfortable to sail in the same party with Chiranjeevi as we criticized him so badly before. We thought of meeting YS Jagan Mohan Reddy after his victory but we didn’t get the time. We didn’t even try further”.

Answering about the news about her domination in the family she said- “Generally my husband is not so talkative. So I talk on his behalf. That’s sending the wrong signal that I am behind every word”.

Sharing about the relation with Chiranjeevi and Mohan Babu, Jeevitha said- “We don’t have any differences with Mohan Babu family. I never said that I would contest independently in the MAA Election. We thought something bad was happening hearing Naresh’s words. But nothing has been happening there. We don’t know if Chiranjeevi is behind Prakash Raj. We never discussed among ourselves even in the meetings. There is a chance for Prakash Raj to contest again. He has some zeal to work for MAA”.

Finally, talking about her upcoming film- “Rajasekhar is ready to work if the right characters are written for him. We remade ‘Sekhar’ as we liked it very much. My daughters helped us a lot in the making of this film right from script, dialogues. re-recording. Rajasekhar appears in two shades in this film. We thought that emotion works in a better way if real time father and daughter work on screen as well”.

The film “Sekhar” is coming out on May 20th.