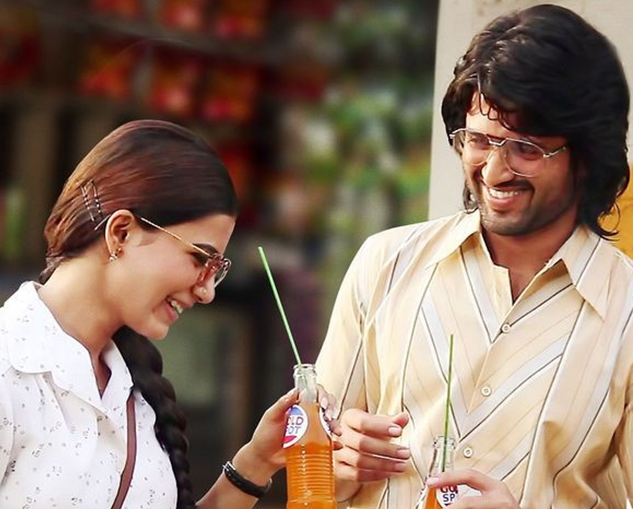 After playing numerous glam doll roles in her career, star actress Samantha decided to take up interesting roles that provides her a scope to perform as well as look glamorous. She completed the shooting of ‘Shaakunthalam’ and her thriller film ‘Yashoda’ is in the last leg of production. She is also the female lead in a web series created by Raj & DK.

It is known that she is the heroine in Vijay Deverakonda’s romantic entertainer ‘Khushi’. The film made a lot of noise due to its title. ‘Khushi’ is an iconic love story of Pawan Kalyan and Bhumika which is still fresh in the hearts of many. We need to see if Vijay and Samantha do justice to this title or not.

Keeping it aside, Samantha is reportedly ready to give her best for this film. Apparently, there will be a lip lock scene between Vijay Deverakonda and Samantha which is supposed to signify the chemistry between the lead pair. Director Shiva Nirvana has designed the story in a unique manner as per reports. Grapevine suggests that Samantha who is a few years older than Vijay in real life will be playing the role of ‘Rowdy’ hero’s super senior in college.

Deverakonda will be seen as a racer in this movie and it is expected to create magic on the screens according to the team. The shooting is going at a brisk pace and we need to see when the film hits the screens. The first look poster which came out a few days ago got a very good response.

Apart from ‘Khushi’, Vijay’s Hindi-Telugu bilingual action drama ‘Liger’ will be released on 25th August. Made by dashing director Puri Jagannadh, the promotional content is getting a huge response from his fans. Vijay accepted another film under Puri’s direction and it is named ‘Jana Gana Mana’.