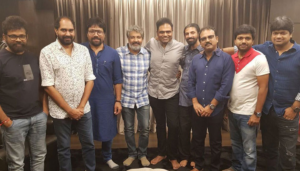 For instance, NTR and Ram Charan would be doing 2 films each in a span of doing one film with Rajamouli which means, two stars could do two films each i.e four films and four directors would have got work. But by committed to do Rajamouli’s RRR, the star heroes couldn’t work with other directors, thus indirectly affecting the work of the directors.

After Ala Vaikunthapurrammuloo, director Trivikram Srinivas has to wait for a while to team up with a star hero. Though Sukumar would be directing Allu Arjun, it would only roll on after Allu Arjun wrapping up his ongoing film Ala Vaikunthapuramlo.

Koratala Siva, who had waited so so long for Chiranjeevi as the Mega Star got stuck with Sye Raa earlier, is finally going to direct Chiru in Chiru 152. A popular and successful director like Koratala Siva waiting so long means loss to film industry as he could have done a movie in between which would have created wealth in industry and work to industry people.

Boyapati Sreenu is waiting for his next with Balayya Babu. VV Vinayak has moved onto acting as he couldn’t get the dates of star heroes. Sreenu Vytla’s woes may not end anytime sooner given that he had delivered back-to-back duds. Gunasekhar is hoping on historical biographical films and is passing years on each film.

Puri Jagannadh, who is known for wrapping films at brisk pace, too suffered from the lack of star heroes’ dates. Finally, he had scored big hit with iSmart Shankar, ending his flop streak. And he managed to get the dates of young sensation Vijay Deverakonda. After this, Puri also wants to move to Bollywood knowing that it is not so easy to get dates of star heroes.

Even after Sye Raa, Surender Reddy is also yet to lock in a hero for his next. While the likes of Prabhas and Mahesh are keen to work with Surender Reddy, easily it is going to take time as Prabhas is also busy with director Radha Krishna and Mahesh has a line up of commitments before coming to Surender Reddy.

The ‘exit’ of Pawan Kalyan from films has incurred hefty loss to film industry, albeit indirectly as the star is unavailable to create wealth in industry. With stars are interested to work with younger and new-age directors, senior directors are clue less on their upcoming projects and waiting for heroes’ dates with bated breath.

Top directors don’t have dates of star heroes to work with, thus forcing them to sit idle and work on the scripts and even looking for opportunities like web-series. This is indeed a quite shocking and struggling period for top directors. This is Rajamouli-mark ‘revenge’ on his competitive directors.