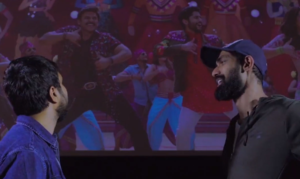 The suspense over Venky Mama’s release date comes to an end with makers of the film coming up with official announcement on the same.

In a video byte released to proclaim the same, Rana shows his frustration with incessant messages to his phone while he’s busy with his workouts.

He then goes all the way to Ramanaidu Studios where director Bobby can be seen watching the final cut of Venky Mama’s teaser.

Rana in sheer frustration asks Bobby to disclose the date at least to him. Bobby is then seen announcing December 13th as release date.

Like every other fan, as we can see in the video, Rana is also waiting eagerly to watch his uncle Venkatesh and cousin Naga Chaitanya together on screen in Venky Mama produced by his dad Suresh Babu and TG Vishwa Prasad.