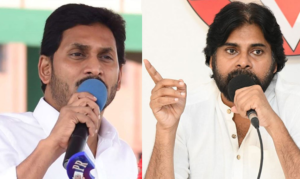 Jana Sena chief Pawan Kalyan has mocked AP CM YS Jagan over the row of religion and caste. Pawan met Jana Sena cadre in Tirupathi as part of his Rayalaseema tour. Here he raked up the issues surrounding CM Jagan.

“You (Jagan) have changed your religion but why are you still sticking to your caste? You want religion, caste, votes and money. If Jagan is a Christian, he should have patience and persistence like the Jesus. But those qualities are missing in him,” said Pawan.

Adding, “I may have lost the elections but I did not fall down. I did not come to politics to amass huge wealth and establish cement factories and big media houses.”

Taking a dig at the YSRCP’s new policy of painting village secretaries, water tanks in blue and green, Pawan said, “Except for the seven hills, YSRCP has painted everything in the state with their party colors. This government has become “Rangula Rajyam,” slammed the Jana Sena chief.