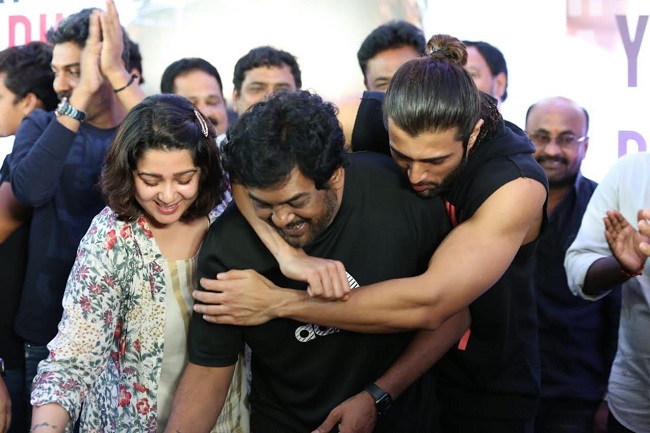 The word ‘dashing’ doesn’t suit everybody and the only director to justify that tag in Tollywood is definitely Puri Jagannadh. The star director has been in the film industry for nearly two decades and gave many blockbusters. He made many heroes into stars and many stars into superstars. Puri doesn’t stop working whether he gets a hit or a flop. His love for cinema is what drove him through his tough days.

After delivering one disaster over another in the last couple of years, he bounced back with ‘iSmart Shankar’ and he is now working on ‘Liger’. Young sensation Vijay Deverakonda is the hero in this flick which is being made simultaneously in Telugu and Hindi. The team recently announced that Mike Tyson has come onboard for this project and movie lovers are quite excited about it.

The film is currently being shot in Goa and the entire team celebrated the birthday of their director in a grand way. In these clicks, we can see pictures of Puri Jagannadh cutting various cakes and hero Vijay Devarakonda standing beside him. Charmee is also actively involved in it and these photos are going completely viral. ‘Liger’ is a prestigious film in Puri’s career and he would reach the next level if this film succeeds.

Karan Johar is presenting this film while Puri and Charmee are producing it themselves. Ananya Pandey is the heroine in this slick action film in which Vijay will be seen as a boxer. Vijay went through a lot of strenuous effort to get expertise in this sport and he will be seen flaunting his six pack abs in this movie. The expectations are sky high on this film and let us see how ‘Liger’ is going to be. The release date is yet to be announced.

Vijay Devarakonda made his debut with ‘Nuvvila’ in 2015 but shot to fame with ‘Yevade Subrahmanyam’ in 2011. His supporting act landed him in a film like ‘Pellichoopulu’ which changed his fate. ‘Arjun Reddy’ made him a huge star. Vijay was the only actor to make it to the Forbes 30 Under 30 list in 2019.