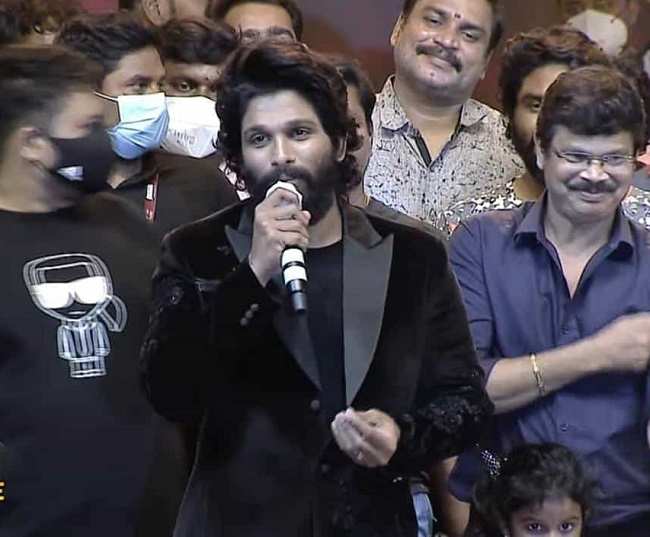 Nandamuri Balakrishna and Boyapati Srinu’s Akhanda is all set for a grand release on December 2nd. A Massive Pre-release event happened in Hyderabad on Saturday evening and has registered a huge crowd making it a grand gala and this also indicates a comeback of the cinema after the Pandemic.

Speaking at the event, Baahubali Director SS Rajamouli said, “Balayya Babu is an atom bomb. Srinu knows how to trigger it. That secret must be told to everyone. Balayya Babu should also tell his Energy Secret. I’m also waiting for Akhanda. Iâ€™ll see you at the First Day First Show at Theater. Akhanda should be a very big hit. It should bring new impetus to the industry”.

Music Director Thaman was in all praise for the movie. He said, “If Balayya is a transformer, Boyapati gives him the correct voltage power. I am indebted for getting a chance to provide music for Akhanda. Balakrishna is like Lord Shiva of the industry. I’m still in a trance. You will enjoy watching the movie in the theater”.

#NBK107 director Gopichand Malineni said, “NBK is a vibration, energy and an explosion. He is the definition of a Mass God. I came here as one of the fans. Boyapati Srinu is a director who knows Mass Pulse. From the first look to the theatrical trailer, the movie has all the stuff fans needs”.

Director Boyapati Srinu said, “This is a kind of film in which fans can keep their hand on the chest and feel proud. I am not going to win with Akhanda, it is the cinema that is going to be a winner. Akhanda’s victory should pave the way to the success of all other films starting from Pushpa to RRR. Balakrishna worked really hard for the film. He fractured his hand on the set but still shot for the mass song Jai Balayya with the injured hand as not to disappoint fans.”

Icon Star Allu Arjun, the Chief Guest of the event said, “The bond between Nandamuri and Allu family dates back to my grandfather’s time. I grew up watching Chiranjeevi and Balakrishna movies. Balakrishna garu is like a father figure to me. I need not say about the movie in Balayya and Boyapatiâ€™s combo. I saw the trailer and it is sensational. I am sure it will become a massive blockbuster and help the industry tide over this crisis. This is the biggest movie to be released after Second Wave. We all want Telugu cinema to shine like Akhanda Jyothi after Akhanda”.

Nandamuri Balakrishna delivered the final speech. He said, “My combination with Boyapati is always a treat to fans. This film will be more than that. Akhanda will keep the devotion alive in India. Parents are gods before our eyes. They are more than gods. My father is my teacher, God. After him, I love my fans. Being able to get the blessings of the fans is my luck. Thanks to everyone who worked for the film. Even during the Corona period, we shot for the movie. A lot of movies are being released from Pushpa to RRR and Acharya. All movies should play well. Both governments must extend their support for the industry.”