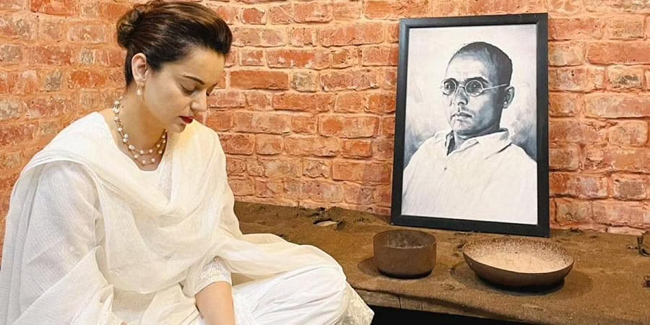 Bollywood actress Kangana Ranaut who is on cloud nine after winning the fourth National Award had visited the Andaman and Nicobar Islands prison where politician Vinayak Damodar Savarkar, popularly dubbed as Veer Savarkar. Kangana paid respects to the leader on this occasion. She shared the pictures of her visiting Savarkar’s cell on her social media.

The series of pictures show Kangana Ranaut sitting in Savarkar’s cell and bowing down in front of his portrait. She also shared a picture of the nameplate outside the Kala Pani that reads “SWATANTRYA VEER VINAYAK DAMODAR SAVARKAR” was imprisoned in this cell from 1911 to 1921. He breathed his last in 1966.

In an emotional tribute, Kangana Ranaut spoke highly about Savarkar and said how scared they have to be against a person to put him in Kala Paani where he cannot escape from the prison. Kangana also said that they have also chained Savarkar during his stay at the prison.

“Today on arriving in Andaman island I visited Veer Savarkar’s Cell at Kala Pani, Cellular Jail, Port Blair…I was shaken to the core … when inhumanity was at its peak even humanity rose to its peak in the form of Savarkar ji and looked it in the eye, faced every cruelty with resistance and determinationâ€¦,” Kangana Ranaut said in her Instagram post.

“How scared they must have been of him not only they kept him in Kala Paani in those days it must be impossible to escape from this tiny island in the middle of sea yet they put chains on him built a thick-walled jail and locked him up in a tiny hole, imagine the fear as if he can fly on thin air across the never-ending sea, what cowards… !!This cell is the truth of Aazadi not what they teach us in our text books …. I meditated in the cell paid my gratitude and deepest respect to Veer Savarkar ji… Svatantra sangram ke is sachche nayak ko mera koti koti naman. Jai Hind,” the actress added.

Savarkar became a controversial topic in India after BJP rose to power. As the BJP is trying to prove the leader as a brave heart, the opposition parties are saying that he is a coward who wrote mercy petitions to the British Rules to release him from the prison.

Kangana Ranaut will be seen next in high-ticket films like ‘Manikarnika Returns: The Legend Of Didda’, ‘Emergency’, ‘Dhaakad’, ‘Tejas’, and ‘The Incarnation: Sita’. She won the National Award for Marinarnika and Panga. She was last seen ‘Thalaivi’ the biopic of former Tamil Nadu CM Jayalalithaa.