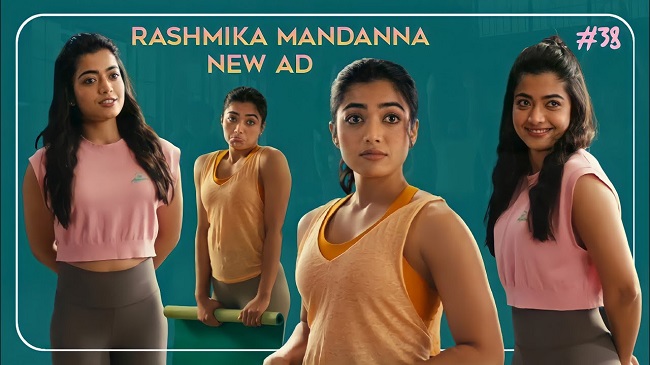 TV commercials and brand endorsements have become an increasingly prevalent income source for top stars across the country. Not so long ago, Ram Charan signed brand endorsement deals with Suvarnabhumi and Disney Hotstar. Charan was seen in TV commercials, endorsing both Hotstar and Suvarnabhumi. On a related note, Mahesh Babu had also signed multiple TV commercial endorsement deals. He was seen in ads for Flipkart and Pan Bahar. These top actors are pocketing big bucks for signing these endorsement deals and they couldn’t have been happier. They are being top bucks for simple ads. We can expect other top stars in Tollywood to also take this route in the days to come.

Coming to the topic, young actress Rashmika Mandanna has also come on board as a brand ambassador for men’s underwear brand, Amul Macho. She has partnered with Bollywood star Vicky Kaushal for this ad and the duo is seen in the same. However, this ad has drawn a negative response from netizens and especially so from the commoners. Many people are opining that this ad was made in poor taste and say Rashmika Mandanna and Vicky Kaushal should not have starred in an ad like this.

In the ad, we see Rashmika Mandanna staring at Vicky Kaushal’s underwear. She does the same thing again, and this time in a planned manner. Now, netizens are finding fault with the ad as they opine that a lady staring at a man’s underwear and that too intentionally and in a staged manner does not make for good viewing. This ad has drawn a very poor response from the common audience.

Vicky Kaushal and Rashmika Mandanna are two of the most followed actors in Indian cinema and it is well within their right to pick what kind of content to showcase to the audience, but they should be watchful of what they are portraying. Dishing out poor content isn’t what one would expect from top stars like these two, commented a netizen.

It would be really interesting to see how Rashmika and Vicky react to the social media criticism they are subject to.